Wow where to begin?

I’m not usually a fan of helicopters, I don’t see what all the fuss is about, but the air inside this chopper was rife with nervous excitement. You could almost here the thoughts of the passengers out loud, “holy shit, are we running up that?”, “how high is that?”, “aw farrkkkk!” 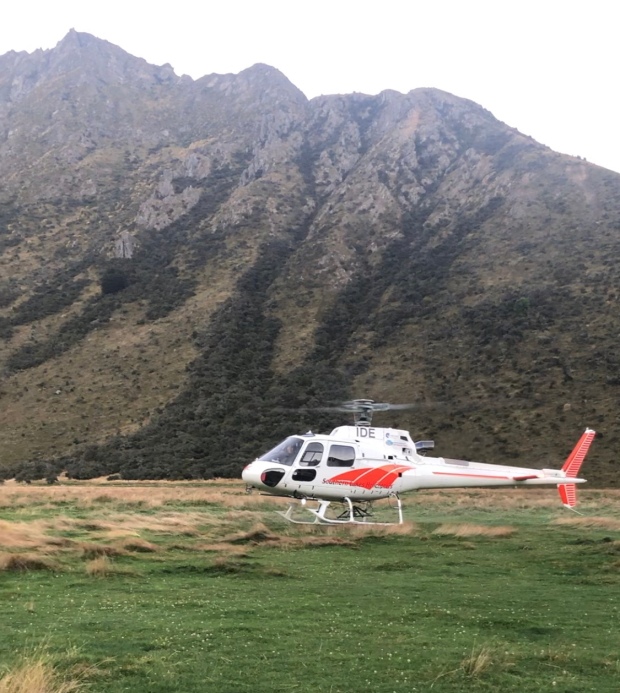 The helicopter landed at a hut after what felt like about a 5 minute trip.

But after hearing about the bus ride from other runners waiting at the start line, the helicopter ride was worth every penny ($135 NZ dollars from the finish line at Moke Lake to the start line.)

From the hut the runners traversed a swing bridge to walk down to the start line. 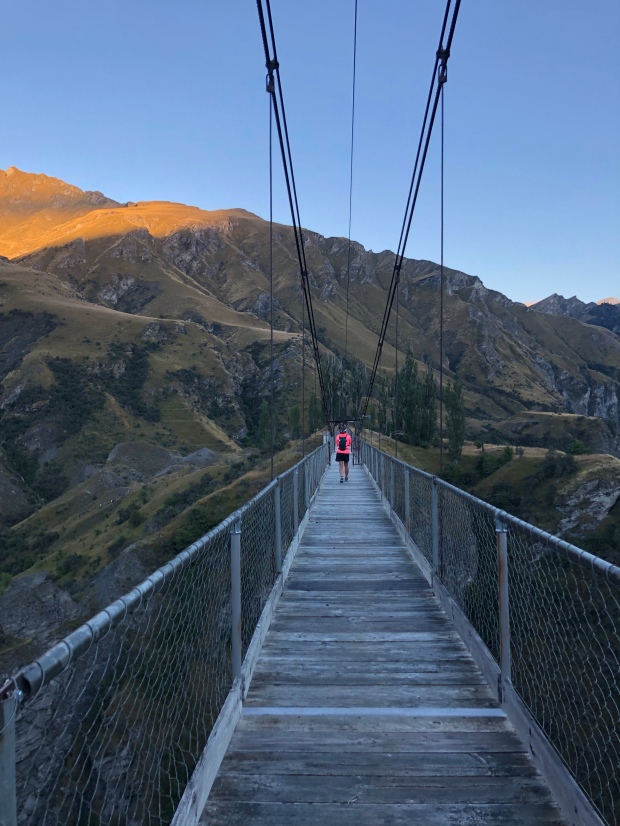 After a quick briefing we were off and “racing” promptly at 8am. 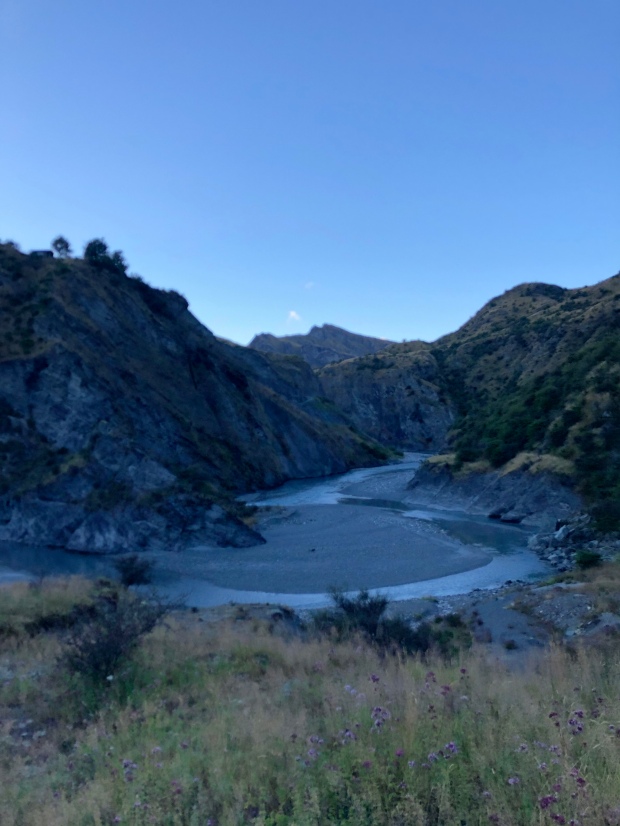 The first kilometre we hiked straight up. I’m sure people were running at the front but for most, the Shotover Moonlight Marathon started with just a taste of the hiking that was to come.

“Be careful and conservative in the first 8km” the race director warned during the race briefing.

I figured it was straight up hill and The warning was only for crazy people who run off like a bull at the gate. But it wasn’t, it was long and windy sheep track around the side of a mountain, wrapping the terrain like tinsel on a Christmas tree. It would actually be quite runnable if it wasn’t for the narrow nature of the sheep track.

I was about 3km in when my ankle cracked to the right for the first time, then about 5 and about 8.

I filled my bottles in the creek at the second check point and surrendered myself to the fact that I would be walking the majority of this run.

I had set myself the challenge to run both Shotover and Old Ghost and pushing too hard on my now very tender ankle could jeopardise that goal. I wasn’t quitting but I wasn’t throwing the baby out with the bath water either. 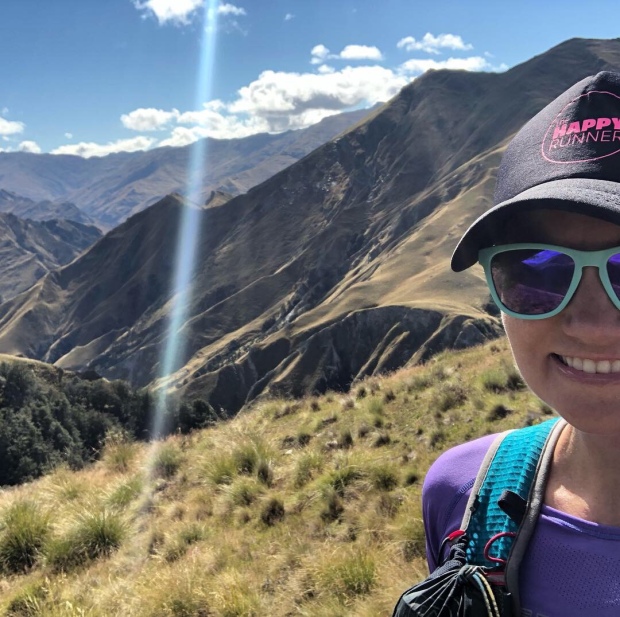 I trudged onward and upward.

Some of the climbs were so steep I lent forward, pushing my hiking sticks deep into the ground and concentrated on where I was placing my feet and where my centre of mass was placed. I was terrified of leaning back just an inch too far only to cause myself to tumble backwards down the mountain.

There’s no pictures of some of the epic climbs, I was too scared! You’ll just have to go and have a look for yourself

After the climbs, we barrelled down a gravel slope (I think I skied) and onto the Shotover River. The water was freezing, which felt great on my increasingly sore right ankle before the frozen water locked it into place.

The tracks around the river were an exquisite dark green and bordered by tall, thin pine trees. The track was soft and bouncy under foot I imagine because no one has run on it since the race last year.

The in and out is the water played havoc with my ankle as each time I struggled to warm it back up again and get some sort of “run” happening.

But by this point I knew I had to run. There was a cut off and I was dangerously close to be told to take a detour and do an abridged 37km course.

For a little perspective, my road marathon PB is 4:06, the cut off was 26km in 6 hours and I was cutting it fine.

As a group of us walked up the river in knee deep ice cold water, a marshal standing in the middle directing us up the ladder said the cut off was at 23k at the house.

Well I went as fast as I could, power hiking and plodding along to get to the house only to be told I had 40 minutes to get to the actual cut off at 26km and it wasn’t going to be flat and easy going. 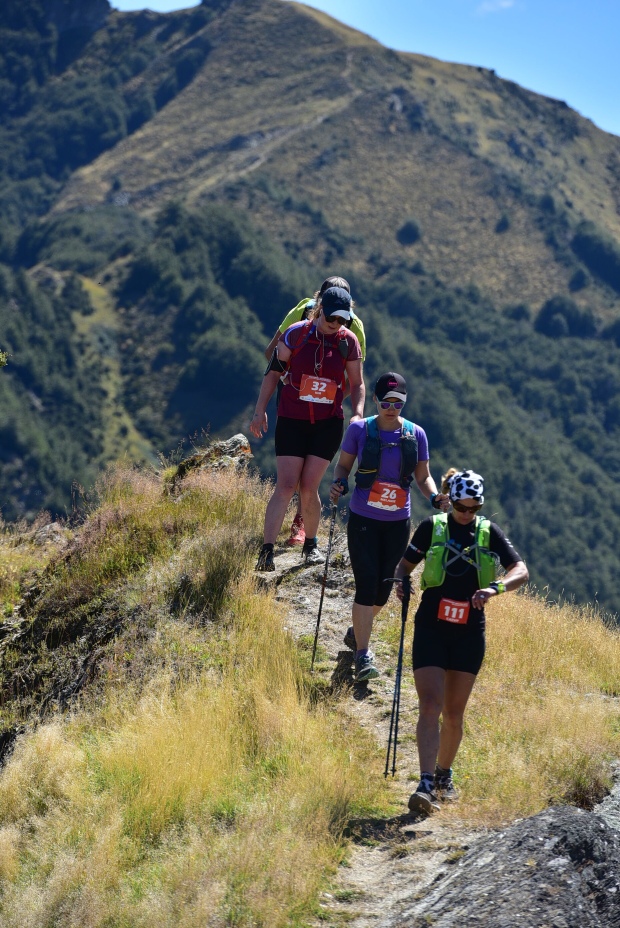 I’d been running with a great group of ladies up to this point, mostly from home, Melbourne, Australia. We had shared stories of races back home and marvelled at some runners power on the uphills and bravery on the downs. We needed to make it to that cut off. It was to be a team effort.

We scrambled up a scary narrow ridge and straight into the lens of a race photographer. I yelled “make me look brave” before tip toeing precariously down a steep slate section and getting photobombed by elite Australian ultra runner Majell Backhausen. I had no idea he was there until I saw the official race photos a few days later. 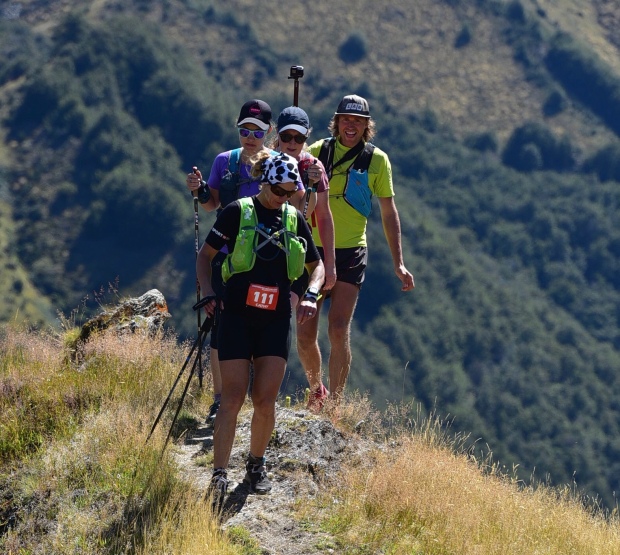 I made it to the cut off with only 8 minutes to spare.

The pressure was off, let’s just make it to the end and make sure everyone gets there.

The last 12km of the course was not as technical or spectacular as the first half but the scenery was still nothing to be sniffed at!

There was at least one steep climb where I scrambled on all fours, refused to look down and tried not to cry.

I didn’t think I was scared of heights but maybe I am, well at least scared of the plummeting to my death part. 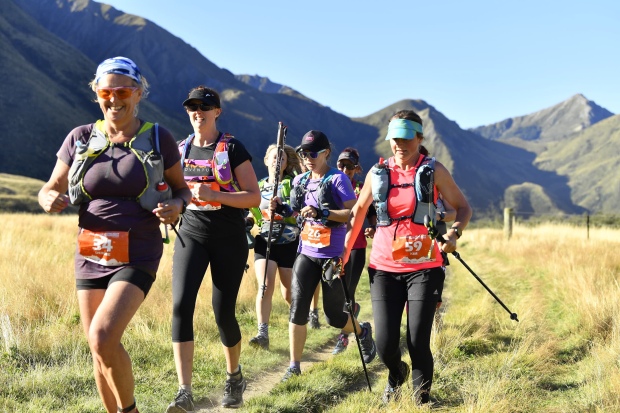 I’m not sure when but at some point on a gnarly climb our little fellowship, which had grown to about 8 ladies, decided no one was finishing last and we would all cross the line together.

Neither the race photographer or director were as impressed with our stampede as we were, but we did it. It look just over 10 hours and 34 minutes. Insane. 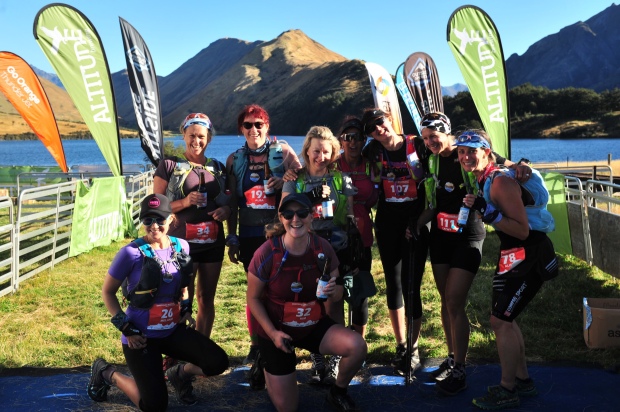 I’m proud of us ladies for getting it done and I’m pretty chuffed with myself too. It was so far outside my comfort zone that I could never have planned to go there.

I was scared a lot (mostly of falling from ridges and ladders) and I was hurting a lot (mostly from my now dodgy ankle and my toes smashing the front of my shoes on the downhills) but it was so worth it. I honestly can’t believe I actually did it. I knew I could run the distance but this was no fire trail.

So what’s next? Old Ghost ultra in a week, maybe Warby trail fest, Brisbane Trail ultra and who knows maybe Shotover will have me back next year. 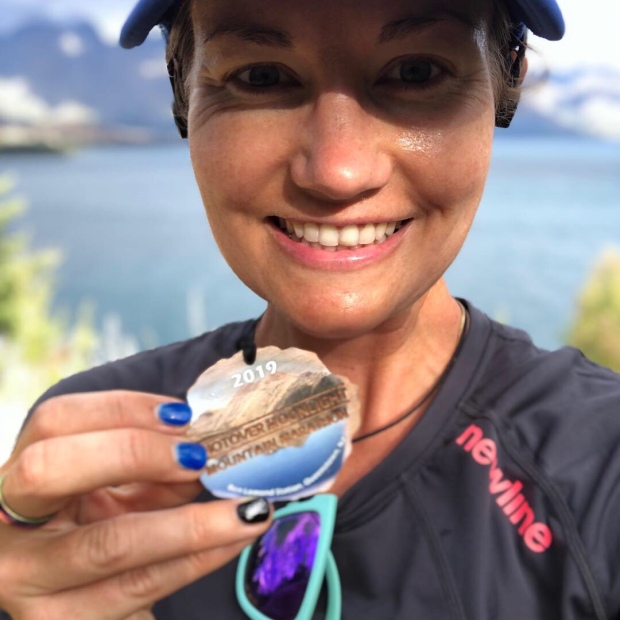