I stopped running for a week and I didn’t die!

I had to go back into the archives of Strava all the way back to June 2015 to find a week without running.

I had a run a 50k the week before and I guess I took a week off. I don’t remember it.

Honestly I was surprised I found one. Since I started running in 2010 I have tried to run at least 2-3 times per week. The distance has changed and the Garmin watch has been upgraded a few times but my love for running has always been there.

So when this pesky little niggle refused to budge last week, I promised myself and the Running gods, at around the 5k mark of Two Bays, that if I could just make it through to the end and get some decent Tarawera training in, then I would take a break. I would give that pesky niggle a chance to heal.

Not to be confused with post marathon fat week (a week of a little bit of slow running, walking and a lot of junk food consumption), recovery week was to be all about doing everything I could to eliminate PN (pesky niggle) and get back running again for a two week taper into the biggest race of my life.

It started straight away with a dip in the ocean post Two Bays 56. The PN was sore. Super sore. I was equal parts worried and scared. I’ve never been injured before. I’ve had soreness of course, I’ve had epic chafe in places never to be named, I’ve tripped and nose dived on the trail over seemingly nothing at all and post race I sometimes walk like the tin man sans oil (oh come on as if you have never rolled sideways out of bed the next day) but an actual injury, this was new and uncharted territory and I didn’t know what to do.

I wanted to get help, I wanted it fixed, but all runners know that if you go and see a “professional” they are likely to tell you in one way or another that you can’t keep on running. 6-8 weeks, 8-12 weeks, whatever the time, you go see a professional, you get benched. I’m going to complete the Tarawera Miler in 3 weeks, benched is not an option.

Post ocean dip, after a quick stop at Olivers for post run vegan goodness (veggie pocket and green smoothie) it was back home and into RICE mode, Rest, Ice, Compression, Elevation. I wasn’t trying to recover from the run, I was trying to fix the PN. Sleeping in compression is never much fun, so they got removed at about 3 am but back on the next day and were quite snug under my work pants.

Monday involved lots of shuffling and lots of water. Everything hurt. I had clearly been over compensating for my sore left leg on the weekend as my entire right side was also sore giving me a pronounced limp. More ice, more water.

A quick stop at the supermarket on the way home for Epsom salts and enough ingredients for a week of recovery smoothies.

I knew going into recovery week that I was going to have to step outside my comfort zone a little bit.

Tuesday morning it was off to the local outdoor swimming pool. I truly hate the pool. Having people see me in my bathing suits transports me back to being 12 years old at the beach and having to waddle because my thighs chafed, chubby and embarrassed.

Luckily there was no one there. Since I haven’t swum on a regular basis since my high school told me I didn’t have to, I’m not really the best swimmer. I won’t drown, but I certainly won’t break any records. I jumped in, a little disappointed that it wasn’t that cold and plugged away at 50m freestyle and breast stroke intervals. After my 1 km, I did some stretching and running on the spot. The leg felt pretty good, at least until I got out. It was a little odd that when I started there was only one lifeguard watching over me and by the end there was three. I wish this was because I looked super hot in my modest speedo one piece and not because I looked like I could drown at any minute.

Tuesday morning is usually a longish run day (10-20km) or a speed type session. I’m glad I got out and did something. Not missing running or feeling too crazy just yet.

When I got home it was into my first recovery smoothie of the week.

Wizz in the nutribullet/vitamix/whatever blender you have and into the large drink bottle with ice. 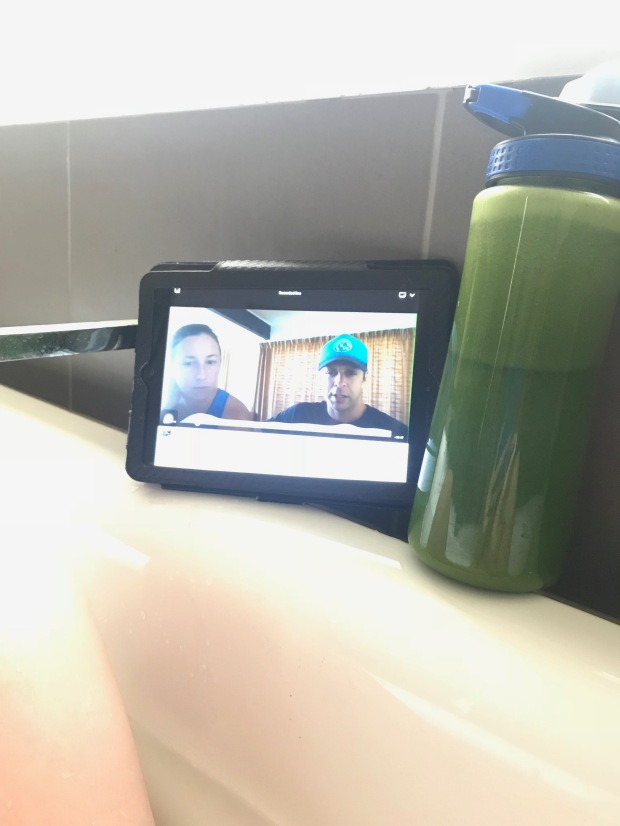 Full disclaimer, I have no idea if that smoothie actually does anything. But each ingredient is good for reducing inflammation and promoting recovery, plus it gets fruit and veg into your system and water too so it can’t be all bad.

Wednesday bought all new challenges. With my green smoothie in tow, I headed to Performance Healthcare for a remedial sports massage. I have never done this before and I was super nervous. I knew I was going to get told off. I was expecting “you run too much, you don’t stretch enough, what do you mean you’ve never had a massage”. I got a little bit of that but it was mostly a supportive and encouraging environment. Not once did Cristina say I should take a break or not run Tarawera. It was all about how to get me ready. She took it easy on me (it still bloody hurt) and recommended some stretches for the rest of the week and I booked in for another ‘proper’ session the following week.

I left feeling like I might actually be able to pull this off. It isn’t all lost.

I went home and practised walking up and down the backyard with no shoes on using my new Leki trekking poles.

Thursday was much of the same, green smoothie, a bit more walking and another torture session at the pool. Now I miss running. I made a great mixed berry protein smoothie bowl but still I missed running.

By Friday I was snappy and angry at the world. You forget the effect running has on your mental health until you can’t run anymore. I was walking around with a giant “fuck off” sticker plastered across my forehead. I got frustrated easily, my tolerance for bullshit was at an all time low and all that would fix it was Grey’s Anatomy and vegan Ben and Jerry’s, in an epsom salt bath of course.

I wish I could say I focused solely on my recovery. I tried hard. I stretched every day. I didn’t run. My step count took a dramatic hit (14000 per day down to 9000). I tried to sleep well. I took so many supplements that between the B2 and Magnesium and the green smoothies and roast beetroot, my toilet deposits were akin to that of a unicorn.

But I didn’t eat the best. I let my emotions get the best of me so I ate them. I ate my frustration at being injured, I ate my annoyance at useless workplace politics, I ate my fear of failing at Tarawera.

I’m surprised I didn’t put on any weight. I feel like crap but the scales (weight, fat %, water and muscle %) are all pretty standard.

I woke up on Sunday feeling good. I could walk normally for the first time all week. I got dressed and headed out the door. I tried to run, several times and I just cried, the ugly cry variety. Not because it was a miracle and I was fixed but because it wasn’t. I couldn’t run. I can’t run.

I managed to run/walk for 4 km.

I’m not letting this beat me. Miler or bust.

2 thoughts on “I stopped running and I didn’t die”