I’ve always wanted to do a juice cleanse but ironically like being vegan, I’d put into the too hard basket.

I’d read a lot about the benefits of juice fasting, from the obvious weight loss to improved sleep, improved blood sugar levels and a general diet restart.

To be honest, the diet re-start was the main reason I was interested in doing the juice cleanse. This is a little embarrassing to admit but my diet got worse when I went vegan.

I have been a vegetarian since I was a teenager. I had the occasional omni episode but was predominately a vegetarian. At university I noticed an adversity to dairy products so dropped yogurt and dairy milk but would chow down on cheesy pizza and eat ice cream by the tub.

I cleaned up my diet in about 2010 when I started running on the regular. I ate really healthy with few treats like chocolates, cakes and ice creams but when I went vegan it was like a red flag waving a bull. What chocolate ripple biscuits are vegan? Pringles are vegan? It was like someone gave me permission to eat all the “vegan” crap I wanted and I completely ignored the fact that I went vegan for my health. It sounds ridiculous doesn’t it but I never questioned it.

The boom in Australia of vegan ice creams and vegan cheeses has completely butchered by diet and I started yoyo dieting like my previous teenage self.

I was hoping this juice cleanse would help sort that out and help me kick the eating crap habit.

The cleanse
The juice cleanse I picked was a cold pressed vegan juice cleanse (I know the ‘vegan’ distinction sounds silly but some companies have smoothies as well).
I made the decision early on that I did not want to do a do it yourself juice cleanse for a number of reasons.

1. The mess.
2. I would have to buy a $$ juicer.
3. To get the most benefits of fresh juices you really should drink them within an hour or so and that is not practical for work

So I knew I had to find a cold pressed juice company and I wanted a local Geelong one (#supportlocal). I stumbled upon the Juice Syndicate on Instagram. Their juices were vegetable based, the servings were generous, delivered to my house and pretty cheap compared to some of the Melbourne based companies doing exactly the same thing.

So I bit the bullet and bought a 5 day cleanse. The Juice Syndicate offered a number of different cleansing options, from nothing but juice to a juice supplemented diet plan. I figured all juice was the go but in retrospect I probably should have started a bit smaller with a 2 or 3 day fast.

I ordered on the Thursday and my juices arrived Monday night (which just so happened to by a public holiday) and I recieved a text message at 7:50 PM saying my juices were at my doorstep. Sure enough in a cardboard box was 35 350ml bottles of juice.

I packed them into the fridge and downloaded my instructions for the next day. There were four different juices and a plan for which juices to have when. I got my little esky out and went to bed.

I started my Tuesday like every other Tuesday morning. I had a 500 ml glass of warm water with half a lemon squeezed into it, a cup of black coffee and headed out for an easy run.

I made the decision that early on that because I was maintaining my normal work schedule and had a few important things I needed to do during the week that I wasn’t going to cut out coffee. I wasn’t sure what was going to happen on this fast but I had to still be alert and productive so the coffee wasn’t going anywhere. 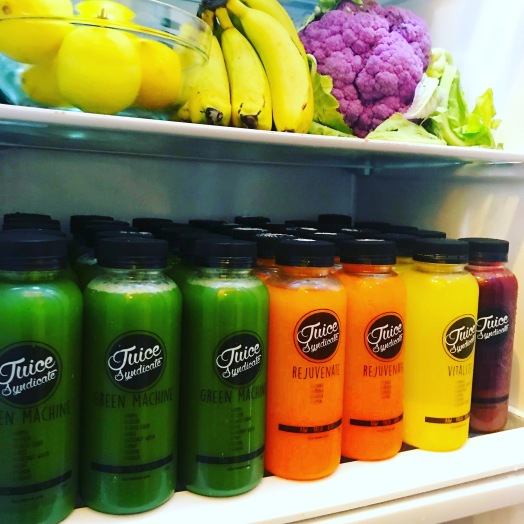 After my run I had some more water and started on my juices.

By 6 PM, I was only up to 5 juices and could not possibly drink another one. I usually drink 2-3L of water per day, plus a couple of black coffees. When I added in the 2 L of juice and all the herbal teas that I was chasing them with because the juices made me freezing cold, I think I spent most of the day on the loo!

I woke up feeling fresh and alert. I also felt insanely lean and light. I got on the scales, almost 2 kg lighter than the day before! I had no idea of the sheer volume of food I was eating. I’m assuming the weight loss was just food going through my digestive system and since there was no food, there was no weight. Crazy!

I didn’t feel hungry until about 3:45 PM when I felt short, snappy and kinda angry. Granted there were external things going on that was stressing me out but boy was I hungry. I sat in traffic for an hour and a half on the way home so when hubby made baked potatoes with black beans for dinner, I had some.

Initially I felt bad like I had ruined my fast and I wouldn’t see any of the benefits but remembered people did the fast for different reasons and I hadn’t binged on ice cream. I was still on reset mode. I had a hot bath and went to bed early.

Getting up on Thursday I was determined to “be kind rewind” and start afresh. I was now exactly 2 kg down and I honestly felt awesome. I really like the light feeling and not feeling like I’m stuffed and heavy all the time. 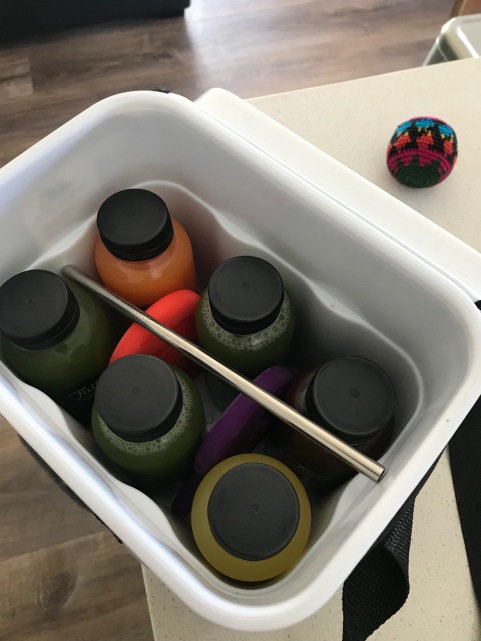 In terms of flavor I really liked the juices, well except the purple carrot and beetroot one. I didn’t really rate that one at all. My favourite was probably the citrus lemon and grapefruit one with turmeric and cayenne pepper. It was zesty and fresh and then a little bit spicy. I actually really liked it.

I hit some hurdles on Thursday that were out of my control. Essentially there were no opportunities for juice breaks. So I had my early morning juice and two juices at lunch, but then come 4:30 PM when I left work I was absolutely starving. I had another juice and heaps of water but it just wasn’t cutting it.
I got home and had some more water but I just couldn’t stomach and more liquid so I had another plain baked potato. Fail number two but again, at least it wasn’t junk.

Another bath and early night.

By Friday I was over it. I felt like I had failed and I was really tired. I normally get a sleep in on Thursday that didn’t happen and the past few days had been more stressful that usual. I had my juices in the morning and had some steamed dumplings for our office “lunch order Friday’ at lunch. I also didn’t get a chance to run the past few days either so my bitch level was high.

Friday dinner was a complete bust. Pizza. Yep. But unlike a week ago, I didn’t over eat. I had a few pieces but probably because I was full of liquid I stopped when I was done and I felt good about it. I didn’t feel guilty, heavy or bloated.

Maybe this juice thing worked after all.

So the “fast” is now out the window but I’m not going to waste all the good juices in my fridge. As I was only doing 5 instead of 7 on the days I ate dinner, there is still 2 days plus of juice still in the fridge.
I got up and went for a run and had a green juice with my brekky/lunch (breakfast at lunchtime). I had another juice for afternoon tea.
The juices have a one week life span so I’m going to keep juice fasting until lunch time each day until they are gone.

Would I recommend a juice fast? Yes, depending on why you want to do it. Would I recommend it if you want to loose weight? You will of course, unless you were already starving you could be in a calorie deficit but it’s only 5 days and most of the “weight” will be related to a lack of solid food in your system and then the effect of water loss due to low carb in take. Would I recommend it for a diet restart? Yes 100%, but just get it for a few days, I think 3 days would be what I will do next time.

Did I feel tired and lethargic? No

Did I sleep better? No not really, I had some really vivid dreams though.

Did I still poop? Yep, thanks for asking.

Did I loose weight? Yep, 2 kg even with the eating.

Did I keep exercising? Yes and No. I exercised on the Tuesday, Friday and Saturday.

Did I feel hungry? Only on the second day. I think if I had been on my own (not at home watching hubby eat) and could push through I would have made it longer with juice only.

What else did I notice? I felt so much trimmer and all my clothes fit better. My skin was clearer (I was also drinking heaps of water). I didn’t get headaches or any other cravings for food of any sort, except salt, I craved salt a bit on the third day.

One big issue was the plastic bottles! I’ve been trying so hard to live more minimally and sustainably. I have a keep cup, green bags and a re-usable metal straw. I compost and have my own veggie patch. The environment is one of the main reasons I went vegan.

I emailed the Juice Syndicate and they don’t re-use them. I’ve had a look around the internet and I found a Melbourne company that uses large glass bottles, Home Juice Bar. I might give them a go next time.

The juice cleanse was $250 which I put on AfterPay. It’s pricey but I think in the long run I would have saved me so much money on junk food and because I know it will be coming out each fortnight it will be a nice reminder to stay off the junk.

At the end of the day, the cleanse did what I wanted it to do. I cleansed my pallet and my gave my insides a break from all the crap fuel I was putting into it. Can’t wait to do it again, but maybe just 3 days next time and with a company who are a bit more enviro-conscious.